5 Leadership Lessons I Learned While Training With A Navy SEAL

When I walked into his barn-turned-office, my friend and client, a retired Navy SEAL, waved to me from his office/gym, commented on my recent weight loss and asked if I wanted to work out with him.

Now I don’t know how many Navy SEALs you know, but I was a little more than intimidated at the thought of working out with one, so I made the best possible excuse I could think of at the time.

“Man, I’d love to, but I don’t have any workout clothes with me.”

Undaunted, he reached into what appeared to be a military duffle bag, pulled out a pair of camo pants and cut them into a pair of makeshift shorts right there in front of me. I guess anticipating my next excuse, he reached back into the bag and tossed me an extra pair of tennis shoes as well.

I didn’t bother trying to come up with any other excuses because I could tell this guy was resolved.

So I worked out with a Navy SEAL; and in doing so, I learned some pretty valuable leadership and life lessons. 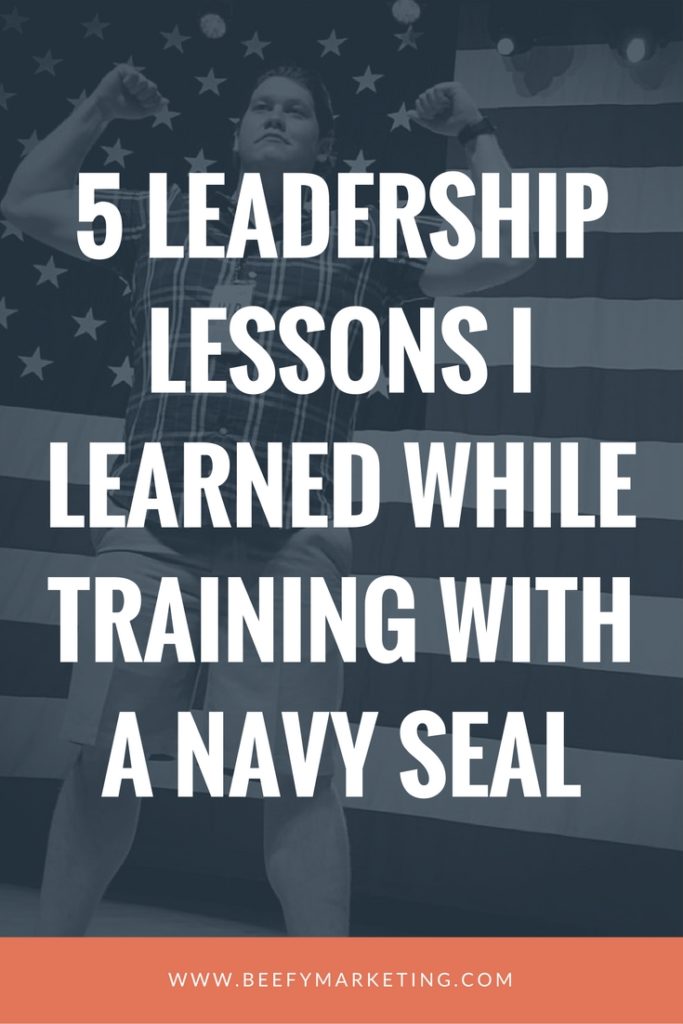 5 LEADERSHIP AND LIFE LESSONS FROM A NAVY SEAL

Here was a retired and highly decorated Navy SEAL, (one whose story had recently become a best-selling novel and Hollywood blockbuster), inviting me, a somewhat overweight marketing entrepreneur to join him for a workout. He wasn’t too famous or too important to stop and encourage me in my journey to good health. He was incredibly humble.

And I had to humble myself as well. I knew I wasn’t going to be able to keep up with him, especially considering that the workout he was about to do was P90X3! But I also knew if I didn’t humble myself and go for it, I was going to miss out on a pretty incredible and possibly once in a lifetime experience.

So I humbled myself and went for it.

There was no way I was going to keep up with a Navy SEAL in a workout. No way. I absolutely knew I did not have what it took. But I did it anyway. And likewise, you should never turn down an opportunity because you think you don’t have what it takes.

You might not be your best in that moment, but you can learn in that moment and what you learn will probably help you down the road.

Because the parts you succeed at (and the parts where you fail) will make a significant impact in how you mature.

3. DO WHAT IT TAKES TO MAKE IT HAPPEN

I didn’t have workout clothes. That was the only thing standing between us and a great workout, and there was no way he was going to let that be an issue. So he did what it took to find the resources to make it happen. And although he didn’t give me the shirt off his back, he made a pretty personal sacrifice to help me get started.

I have to be willing to do what it takes to make it happen in my business and my life.

I can make a million excuses, or I can find the resources I need to get the job done.

I’m not gonna lie. That was one incredibly difficult workout.

It Kicked. My. Butt.

And I wanted to quit plenty of times. But I didn’t. And he didn’t let me. I slowed down a couple of times (at his encouragement) but I never quit. I know it sounds cliché’ to say “Never Quit,” but having a lifestyle of never quitting is way different than just having a mindset of never quitting.

It’s probably one of the biggest things I took away from our time together. This dude never quits. And he never lets anyone on his team quit either; which brings me to the next thing I learned.

The one thing a Navy SEAL understands, probably better than anything else, is that team matters because the mission matters, and the mission won’t be a success without the team being a success.

In that moment, for that workout, we were a team. He could have totally left me in the dust, but he never did. If I slowed down, he slowed down to encourage me to keep going. And he didn’t just encourage me with words; he physically helped me.

At one point we were trying to do pull-ups (I couldn’t do one) and instead of just pumping out his pull-ups and being done, he got down, came up behind me, grabbed my feet, and literally helped me execute a pull-up (talk about humbling). But he didn’t stop there. He gave me tips for how to accomplish a pull-up, on my own, in my daily workouts, when we weren’t together. Because we were a team, and team matters.

Incredible opportunities will come your way in life when you least expect them. Be willing to humble yourself and take the risk, then fight like hell to finish (especially when it gets hard). One thing I know for sure, you’ll never regret trying.

Do you want to know how to get more traffic and increase your revenue? Yes, show me right now!